There’s a real theatre to making popcorn. Or at least, there is the way Drum & Kernel make it.
Stood beneath his eye-catching red market stall canopy behind a clear safety sheet, Drum & Kernel co-founder Matt Mead — who’s wearing full overalls, welding gloves and a tree fellers face guard — stirs the popcorn kernels as they pop, bang and whistle furiously in the large drum cooker from which his company takes its name. “We’re popcorn purists, and I hope the name reflects that.” says Matt. This rather unique and noisy spectacle coupled with Matt’s shall-we-say somewhat eccentric attire is drawing in a large and curious camera-weilding crowd to their Market Stall at Broadway Market in East London.

“…it’s vital!” says Matt of his safety gear. “The very best kettle corn is hand popped, but that does mean an awful lot of sugar and oil splashing about at around 200 degrees. And despite all the gear, sometimes a rogue kernel will still pop down your neck or, worse, into the welding gloves. We have some excellent popcorn scars we can bring out at dinner parties…” 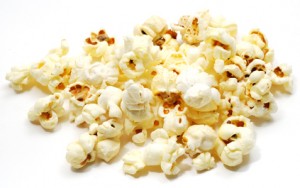 Somewhat bizarrely, Matt’s description of the dangers of popcorn production are not dissimilar to those encountered within our own business during the manufacture of the market stall and pop up gazebo frameworks that Matt and many street food vendors like him trade from within; rather than popcorn kemels however we’re instead dealing with red hot welding sparks which, on rare occasions and despite our best efforts, can end up in places they shouldn’t and, like Matt, many of our manufacturing team, myself included, have a few battle scars that we’ve accumulated over the last 40 years of market stall production.

“If I’m at the kettle, I probably won’t notice until I tip the batch, and then if I’m lucky, I get a round of applause!”

It’s early March and it feels like Spring is just around the corner; there isn’t a cloud in the sky and Broadway Market which lies beside Hackney’s London Fields and by virtue currently one of the most in-vogue markets in East London, is absolutely thronging. Jamie, Matt’s assistant for the day, stands in relative safety in front of their Drum & Kernel emblazoned pop up gazebo handing out free tasters to the rapidly growing crowd. The theatrical element of the popcorn making process was never intentional explains Matt, “…we weren’t really expecting that when we started the business … it’s often the case that one or two people watching the process can quickly turn into a crowd. If I’m at the kettle, I probably won’t notice until I tip the batch, and then if I’m lucky, I get a round of applause!”

“Markets at their best are vibrant, social spaces, and the more we can do to engage people the better” continues Matt. It’s a sentiment shared not only by ourselves but also by high street retail guru Mary Portas who, in her government commissioned report on the future of Britain’s high streets, cites Markets and their role in enriching local communities and inspiring grass roots enterprise as being vital to the future of our town centres. “It feels great to be part of such a healthy and vibrant street food scene in London at the moment. You look around a market like Broadway and the cross-section of businesses is incredible. So much energy and talent – and the great thing about markets is they are accessible, so you can take ideas and try them out with your customers right there without the huge overheads involved in a shop or premises”.

Broadway Market with its array of music, fashion, art and pet accessory market stalls positions itself as something a little more diverse and, dare I say, more interesting than just another street food market. It is however only one of a number of Markets in the London area which Drum & Kernel regularly attend with their roots lying on the south side of the river in East Dulwich and Herne Hill where they originally learnt to ply their trade “…in our expansion over the past year we have taken the radical step of crossing the river up to Broadway and Alexandra Palace markets. It’s been great to get to know those areas – it’s a cliche, but London is a city of villages and every market has its own character. We also trade at London festivals and events like pop-up cinemas. So far, keeping things within the M25 has been more than enough to keep us really busy, but who knows in the future. We certainly wouldn’t rule out taking our kettles further afield.”

“You look around a market like Broadway and the cross-section of businesses is incredible. So much energy and talent – and the great thing about markets is they are accessible, so you can take ideas and try them out with your customers right there without the huge overheads involved in a shop or premises”

Matt speaks like a seasoned professional but it may come as a surprise to some to discover that Drum & Kernel which he runs with business partner Claire — neither of whom have a background in market trading — is only in its second year of trading. “It’s been a bit of a whirlwind!” he exclaims, “…we doubled in size this time last year and are currently focusing on really consolidating that expansion, training staff, and maintaining equipment. It feels nice just to be taking a breath and enjoying getting to know our new markets”.

On the subject of expansion, a topic with which we can associate as our own Market Stall and Pop Up Gazebo manufacturing business continues to grow, Matt explains some of the issues faced by their burgeoning business; “we’ve started to work much more with employees, and that means sometimes learning how to let go and let them take on more responsibility – not necessarily an easy thing when it’s your business, but so important. And like every small business we have to keep a close eye on cashflow and costs, and during the expansion process that hawkish eye-for-detail was particularly important.”

The hawkish eye for detail which Matt speaks of can also be found in their product, the raw ingredients of which must be sourced from the USA to ensure quality. It’s also evident in their iconic company branding which was developed in partnership with South London design studio Mentsen and features heavily on the printed gazebo and market stall structures which we’ve supplied to Drum & Kernel over the last year. Their logo is a timeless piece of design which encapsulates perfectly the fun and theatre of the product that they produce.

The devil, they say, is in the detail. And in all respects it seems Drum & Kernel have nailed it. Visit www.drumandkernelpopcorn.co.uk to see an up to date list of markets which Drum & Kernel are currently attending.